The Comprehensive Test Ban Treaty Organization maintains a network of sensors around the world designed to detect and locate nuclear tests that might violate the treaty, and, as it turns out these are pretty good at detecting and analyzing the energy released by all sorts of large energetic events, like quarry explosions, volcanic eruptions and of course large meteor events.

Well it should come as no surprise that the Russian meteor event made quite an impact on this network even if it didn't make a huge impact on the ground. The infrasound signal recorded by the CTBTO network was the loudest it's ever recorded in the decade or so since it became operational. And while that's cool, the best part is that they've generated a version of the sound which is pitched up to make it audible to our limited human auditory faculties and you can listen to this signal on youtube.

The signal was powerful enough to be detected 15,000km away at stations in the Antarctic, and using multiple stations they put the time of the event at 03:22 GMT on 15 February 2013. 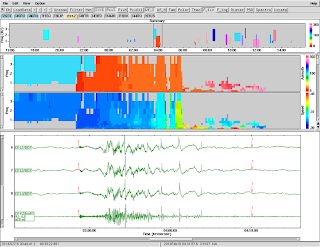